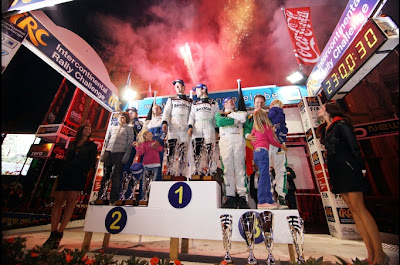 A recently concluded european's favourite IRC series' Geko Ypres Rally of Belgium went through smoothly without much of notice, both because of rally fans running around in confusion whether its IRC or WRC event that they want to be a part of their action weekend, and also by the recent loss of its competitor Gareth Roberts.

The event went smooth with one major crash, though nobody was hurt in the inicdent. Thanfully!

Here are the set of videos covering the complete event fantastically. Really its a great effort by the Eurosport channel..

Popular posts from this blog

By Ashok R July 16, 2012
Day 2 [update]: 'Andreas Mikkelsen' wins 'Sibiu Rally Romania'! The result and winner was obvious with the overall results on the board with just the Super Special remaining. It was a fantastic result for the young Norwegian who won the rally with a comfortable margin of more than 5 minutes ahead of the chasing pack, says " It's been long weekend. With so big gap it's just about getting the car to the finish. We had lot of second places, it's nice to be again on the top spot. It's important result for the whole team. ". Although the luck and conditions were in his favour as the down-order had issues with visibility due to hanging dust over the stages, he was not a easy one to catch either! With all the drama with the second placed Patrik Flodin, this is what he said " We are very very happy, we are very proud of the second place. All the guys in the team did great job. Thanks to them and to Petter! Now w
Post a Comment
Read more

By Ashok R October 10, 2012
The 12th round of IRC season 2012 is going live in exactly in a day's time. Top level competition may be missing, but the rally never lost its charm to entertain the fans & spectators in this beautiful asphalted roads that go around the hilly region of Italy. For most of us [especially myself], Italy means the homeland of the great machine that ruled the rally stages in the early formative years of WRC & rallying itself. Not just machines, even the footwear for the machines. Walter Rohrl in this epic picture gives the goosebumps! Coming to the competition there about 35cars, with just two S2000 Peugeot 207's, one from the homeland team & another from Swiss. The rest 2WD cars are from Italians itself, with an exception of another Swiss. The fantastic stages of the mountains will be the most exciting place to rally with the kind of roads it offers. More updates updated here itself asap. For more details of the rally competition, check the link her
Post a Comment
Read more